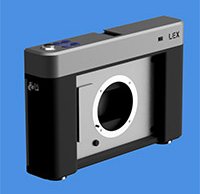 It's not unusual for someone to adapt an older film lens to their Sony mirrorless camera. There are many such adapters suited to the task and the flexibility of the E-mount system is well-noted. However, what about mounting modern E-mount lenses to a film camera? For those wanting to head in this direction, a new project by Alexander Gee will certainly interest you.

Gee has created a new E-mount film camera called LEX. It is the first camera to allow users to combine their favorite film with their modern E-mount lenses. The project is not yet finished, but it has been in progress for a year and will be open source when it's completed. The camera can be built yourself with a 3D printer and you can customize it to have a different mount, such as a Canon FD mount, if you so desire. Sony Alpha Rumors talked with Gee to discuss the project. Click the link above for the full details. Gee himself regularly shoots on E-mount cameras with native E-mount lenses, but he does enjoy shooting film on occasion. He wanted to combine the two systems rather than have two sets of lenses. To work on his project, he had to learn CAD so it was a lengthy learning process. For behind the scenes photos, head over to Sony Alpha Rumors.