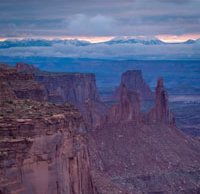 Photographer Thomas Heaton was recently in Arches National Park and Canyonlands National Park for a landscape photography conference. As one of the photographers invited to give presentations, Heaton was also there to lead groups during shooting expeditions. One of these expeditions was to the famous Mesa Arch in Arches National Park. Rather than be filled with excitement to visit such an iconic location, Heaton was instead filled with dread because he had certain expectations about the location. One of these expectations was that the location would be very busy and too crowded. Heaton told his group that if they weren’t the first to arrive, they weren’t going to be able to shoot the arch.

Upon arriving over two hours before sunrise, he was immediately surprised by how small the arch was. The images he had seen online made it seem like the arch is quite large. People often photograph it with a very wide lens and get close to the arch, giving the impression that it’s larger than it actually is. Because the arch is small and you must be so close to it when shooting, this means that you can only comfortably get around five people in to shoot it at the same time. Everyone else will not be able to get the shot that they want. Despite arriving very early, there were already four people set up for the shot.

Heaton addressed his group, asking them to consider alternative compositions. After all, they were in a beautiful area and there is almost always more than one possibility for a great shot, even in a location where everyone arrives to shoot one specific image. “Don’t be distracted by the arch,” Heaton said. As the blue hour arrived, more and more photographers arrived. They all gathered around the arch. It was a scrum and Heaton knew that only a handful of the photographers were actually getting the shot they wanted, and the people who had arrived first and were patiently waiting for the right light probably felt very uncomfortable as dozens of people crowded in behind them. Nobody likes to feel as though they’re in the way. It looked like tough situation all around.

It’s also important to read the situation. You need to understand what makes the iconic shot in any given location actually work on a photographic level. For Mesa Arch to work, you need clear skies and light hitting the right part of the canyon to throw reflected light into the scene. Otherwise the colors won’t pop and it won’t be anything like the wonderful shots you see online. On the day Heaton and the group visited, the skies were gray, there wasn’t much light and the conditions were far from ideal for the famous arch shot. However, the skies were very nice for general landscape photography. The photographers crowding around the arch were so focused on one specific shot that some of them missed opportunities for other better and more interesting images. In landscape photography, sometimes the shot you wanted isn’t going to work out, but that doesn’t mean there aren’t other opportunities. For more videos like this, be sure to visit Thomas Heaton’s YouTube channel.