To make a sharp landscape image from the foreground to the background, use focus stacking 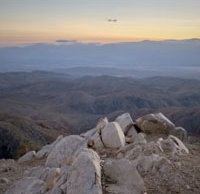 When photographing landscape images, it is often the photographer's goal to have an image which is sharp across the entire frame. There are exceptions, but generally speaking, landscape photographers want images with a lot of depth of field, such that both the foreground and background are sharp.

While it is possible in some cases to achieve this feat with a single image by stopping your lens down to something like f/11, f/16 or beyond, this can introduce issues with diffraction which will soften your entire image. Further, if you want to have a sharp foreground element that is very close to your camera, it will simply not be possible to achieve sharp focus throughout the entire frame.

Fortunately, there is a great technique called focus stacking, which allows you to combine frames captured with different focus points and then combine them into a single image which is sharp from the foreground all the way to the background. In a new video tutorial, photographer Ming Cai shows how to do focus stacking in Photoshop.