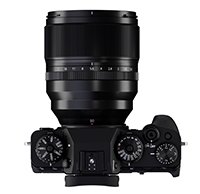 The XF 50mm f/1.0 is Fujifilm's 35th interchangeable lens for X Series. Of the lens, Victor Ha, senior director of marketing and product management for the Electronic Imaging Division of Fujifilm North America says, 'We're really excited about the XF 50mm f/1.0 R WR. Not only is it the fastest interchangeable lens Fujifilm has ever produced, but it's also an incredible tool for visual storytellers to use in telling their stories because its autofocus can achieve critical focus at a very shallow depth of fields.'

I have gone hands-on with a pre-production sample of the XF 50mm f/1.0 lens, but before getting into my thoughts about the lens, let's take a closer look at the lens itself. The XF 50mm f/1.0 consists of a dozen lens elements in nine groups, including an aspherical element and a pair of extra-low dispersion (ED) elements to control spherical aberration. The lens delivers an angle of view of 31.7° and can focus as close as 0.7 meters from the sensor surface. This close focus distance produces a maximum magnification of 0.08x. The lens has a filter thread of 77mm. Excluding the included detachable lens hood, the XF 50mm f/1.0 weighs 845 grams. The lens is also reasonably compact given its maximum aperture at just over 4 inches (103.5mm) long.

In terms of its construction, the lens is weather-resistant and is protected against moisture and dust. Further, the lens has a dedicated aperture control ring, with engraved markings at full stops from f/1.0 through the minimum aperture of f/16. The focus-by-wire lens has a large focus ring. The ring has 120° of total rotation, allowing for precise focus changes. Fujifilm states that manual focus performance is more accurate than ever with the new f/1.0 lens. The lens has also been engineered such that focus shift is minimized. With an f/1.0 lens, bokeh is important. Fujifilm's engineers have designed the lens, which has a rounded aperture diaphragm with nine blades, to deliver large, smooth bokeh. In addition to its very shallow depth of field, the lens also gathers a lot of light, allowing for better experiences when photographing in low light conditions. This results in improved low light autofocus performance as well. Fujifilm states that the Fujifilm X-Pro3 and X-T4 can focus down to -7 EV when using the XF 50mm f/1.0 lens, an improvement of 1 EV compared to other XF lenses. The XF 50mm f/1.0 has a powerful direct current (DC) motor to power quick and accurate autofocus. The XF 50mm f/1.0 lens has an aperture control ring and a wide focus ring. The focus ring has been designed to deliver Fujifilm's most precise manual focus control on an XF lens to date.

As mentioned earlier, I had the opportunity to use the XF 50mm f/1.0 R WR lens ahead of today's announcement. I used it with the excellent Fujifilm X-T4 camera, and the lens impressed. The lens has a very nice, rugged construction and despite the large glass elements inside, it doesn't feel overly large or heavy. It balances nicely on the X-T4 body. The focus ring feels good as well, with smooth, yet deliberate, rotation. The aperture ring, on the other hand, is a bit too loose for my tastes. It's quite easy to accidentally rotate the aperture ring while holding the lens. Further, there's no 'C' position on the aperture ring, a feature I'm used to on my Fujinon GF lenses. This 'C' position on GF lenses allows me to lock the aperture ring in place and control aperture using a command dial on the camera itself, much how other camera systems are operated. Optically, I cannot fully discuss the performance of the lens given its 'beta' status. However, I feel comfortable stating that shooting at f/1.0 on an X Series camera is an enjoyable experience. It can be challenging to nail focus at f/1.0, especially when photographing a moving subject, but when everything clicks, the results are excellent. The lens delivers good sharpness, nice bokeh and demonstrates pretty good control of aberrations. Captured with beta lens. f/1.0, 1/500s, ISO 400. This image has been modified to taste in Adobe Camera Raw. Looking at the out of focus highlights in the background, you can see that there is mild 'cats eye' effect with the XF 50mm lens, but it's quite well-controlled and is not distracting.

With respect to autofocus, the XF 50mm f/1.0 lens didn't blow me away with its speed but considering it's the only f/1.0 interchangeable lens for mirrorless cameras offering autofocus at all, I am willing to cut it slack. It's certainly a very impressive feat of engineering and in many real-world situations, the lens is plenty fast. It also focuses well in low-light situations. In today's announcement, when discussing weather resistance, Fujifilm says that the 'XF 50mm f/1.0 R WR lets you make unique images in the toughest environments.' I'd take that one step further; it lets you make unique images in tough situations in general. While an f/1.0 aperture is not the optimal selection for every situation, the f/1.0 capability allows you to capture images in situations you otherwise might not have been able to. That has a lot of value. Captured with beta lens. f/1.8, 5s, ISO 3200. This image has been modified to taste in Adobe Camera Raw. The XF 50mm lens is a really nice night photography lens, although its 50mm (76mm equiv.) focal length does require you to either use a star tracker or use relatively short shutter speeds for night sky photography. The XF 50mm f/1.0 can only close focus to just over two feet (0.7m), which does limit its usability in close-up photography. When shooting at or near f/1.0 and focusing near the close focus distance, the depth of field is razor-thin, meaning the margin for error is basically nonexistent. This can pose quite the challenge when shooting, but as I've said, when everything clicks, it's very satisfying. Ultimately, despite the challenge, or perhaps in part because of it, the XF 50mm f/1.0 lens is greatly enjoyable to use.