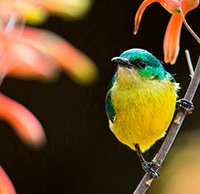 Bird detection utilizes AI-based deep learning technology to allow the camera to automatically prioritize detection of a bird's eye for autofocus tracking, allowing the photographer to focus on composition rather than moving an autofocus point around the frame. If an eye is not detected, the camera automatically switches to focusing on a bird's head or body. Olympus states that even when trees, plants and other obstructions get between the lens and the bird, the camera will be able to reacquire focus. The new bird detection can also be used in conjunction with Pro Capture, a popular feature among bird photographers. Pro Capture 'virtually eliminates shutter lag and reaction time' by beginning to record sequential frames before the shutter release is fully pressed. Further, birds are detected across the entire autofocus coverage area when using all M.Zuiko Digital lenses, including the new 150-400mm super-telephoto zoom lens. When recording 4K 30/25/24p and Cinema 4K 24p video with the Olympus E-M1X, firmware 2.0 adds the ability to output 12-bit RAW data to the Atomos Ninja V HDR Monitor Recorder. The data is recorded in ProRes RAW format on the monitor. You will need to update the recorder in addition to the camera, and this firmware update is available here. The E-M1X's video image stabilization algorithm has been updated as well, leading to improved stabilization, including when panning the camera. All four firmware updates will be adding focus stacking support for the 150-400mm f/4.5 IS PRO lens and improved video image stabilization. The E-M1 Mark III (version 1.2) will join the E-M1X by adding RAW video data output and the improved focus indicator display. Only the E-M1X is adding bird detection. You can see an overview of the features and compatible cameras in the table below. Olympus has also announced a new camera, the OM-D E-M10 Mark IIIs. Compared to the E-M10 Mark III, which was originally released in September 2017, many features are unchanged. The new E-M10 Mark IIIs adds a new silent shooting mode and an additional art filter mode, 'Instant Film.' The camera retains the same 16-megapixel sensor, built-in image stabilization, autofocus system and performance features. The E-M10 IIIs will be sold for $599 USD ($799 CAD) with the Olympus 14-42mm f/3.5-5.6 II R lens. It will be available in early December.