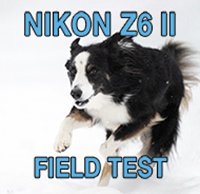 Two years after the launch of the original Z6 full-frame mirrorless camera, Nikon has released an upgraded model, aptly named the Nikon Z6 II. The new camera maintains many of the same features as its predecessor, but nonetheless, Nikon has made improvements in several key areas. I went hands-on with the camera for my Nikon Z6 II Field Test to see first-hand the changes Nikon has made in its new full-frame mirrorless camera.

Maintaining basically the same form factor and design as the Z6, Nikon has added a second card slot to the Z6 II, now giving it a UHS-II SD card slot in addition to the XQD/CFexpress slot. Further, the camera comes with a new battery, the EN-EL15c, which adds about nearly 100 more shots of battery life. It's inside where the biggest changes have been made to the Z6 II, however. The Z6 II adds a second EXPEED 6 image processor. The Z6 II now offers faster shooting speeds, a roughly 3.5x larger buffer and improved autofocus. The Z6 II will also be able to record 4K/60p video, although this feature is being added next month via a free firmware update (which can be done wirelessly on the Z6 II by using Nikon SnapBridge on your smartphone, another nifty new feature). In terms of image quality, the Z6 II uses the same 24.5-megapixel backside-illuminated CMOS image sensor. I have no qualms with this, as it's a great sensor that delivers strong image quality across a wide range of ISO settings. There's a lot to like about the Z6 II and some of the improvements are particularly important ones. To read my full thoughts on the Nikon Z6 II, head to my Nikon Z6 II Field Test.