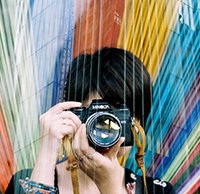 In an article, Eight reasons digital photographers should try film, photographer Stephen Dowling discusses the advantages that film has over digital photography. He is clear, however, that this article is not about fueling the fire that rages between film and digital devotees. Dowling's article serves to show those who have been scared away from trying film that it isn't so scary after all and that they ought to give it a try.

The first reason a digital photographer should give film a try is that it slows you down. With digital cameras being everywhere nowadays, including in our pockets, it is all too easy to shoot every image you can think of without ever slowing down to actually consider what we are capturing. With a roll of film that is inherently limiting in how many images you can capture (without the ability to just delete some shots to make room for new ones), you have 12, 24, or 36 frames at your disposal. You are forced by the media you're using to slow down and think about what you are shooting.

The second, and related reason, is that film has a monetary cost associated with it. A memory card has an upfront cost, sure, but you don't have to pay to download your images from the card and use the card again and again. You have to buy the film roll, there's a cost of processing the film, and there's a cost to print the images. You can go out and take a thousand images on your DSLR, download them, share them online, and then do the same thing the next day without having to pay anything. Doing the same thing with film…that's going to cost you dearly. The cost associated with film teaches you discipline in a way that digital photography cannot. My First Attempt at Film Photography..., 2013, by Flickr user Lies Thru a Lens

"Shooting film is a tactile experience," says Dowling. While a DSLR offers many of the same physical actions as a film SLR, a DSLR doesn't provide you the opportunity to open the back of the camera and go through the process of loading film. Film photography has a "ritual" to it. Similarly, when you're loading your film into your camera, the lack of a rear display will become very apparent. Dowling considers this a good thing about film because there are fewer distractions. To read the other four reasons why Stephen Dowling thinks that digital photographers out to give film a shot, check out the full article here.

(Seen via Petapixel. Index image by Khanh Hmoong. My First Attempt at Film Photography… by Lies Thru a Lens (Warning: Flickr profile contains some NSFW images), DNP100 by Max Chang)