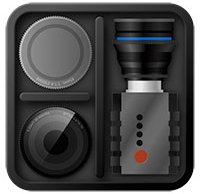 App developer Nevercenter has developed a new all-in-one video editing application, CameraBag Cinema, which is aimed at professionals. The app offers a variety of features, including video filtering, color correction and film emulation.

Nevercenter supplied me with a code to try out the application and I have been impressed with it so far. It offers an intuitive and clean user interface with a lot of non-destructive editing options, including numerous advanced light adjustment and advanced color adjustment tools. There are also more basic adjustments available, such as crop/straighten, exposure, contrast, saturation and color temperature. In addition to adjustments, you can also add effects such as vignette, grain, sharpen, blur and circular blur, or add borders and watermarks. There is also dead pixel correction available.

One of the features that really stood out to me was the tile-based workflow. When working on a video file, your adjustments are saved as tiles beneath the video preview. You are able to make numerous adjustments without creating a lot of clutter in your workspace. Further, if you change your mind about one of the adjustments you made, you can delete it without disrupting the rest of the work you've done.

CameraBag Cinema will be launching tomorrow, April 27th, on the Mac App Store. Pricing is set at around US$100.