Up close and personal: Combining up to 10,000 images to create microphotographs of insects 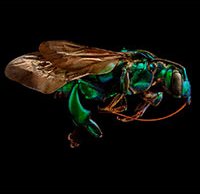 Most images are captured in a split second, processed for maybe a few minutes or so, if at all, and then that's the end of it. But for commercial photographer Levon Biss, his new Microsculpture series relies on a very different and much more intricate process.

By using a microscope lens, Biss captures between 8,000 and 10,000 images of a single insect specimen, moving his equipment by just one-hundredth of a millimeter after each shot. Each image takes between two and three weeks to finish, but the end results are astounding. You can see incredibly rich detail in his work and get a perspective on insects that you have never had before. Vibrant colors and staggering complexities that you can never see with the naked eye become evident.

Biss says of insects, they "are the most beautiful creatures in the world. Their variety and splendor is a dream for a visual artist. When viewed at high magnifications, they never fail to surprise." You can view Biss' Microsculpture work here. Make sure you zoom in -- way in -- to fully appreciate what he's captured.

Seeing them on the screen is one thing, but Biss has also had his images made into nearly ten-foot prints (as you can see in the video above). The works will be on display at the Oxford University Museum of Natural History from May 27th through October 30th. All of the specimens he photographed were borrowed from James Hogan at the museum, which houses Britain's second-largest collection of insects.

Biss, who has made a name for himself taking portraits -- often of athletes -- employs much of the same lighting technique and style for Microsculpture, just on a much smaller scale. You can see his other work here.

Be sure to explore his images of insects. My personal favorite is the Tortoise Beetle. Let us know your favorite in the comments below.