Previous Story ZAP! Ultra slow-motion video of a lightning bolt at 7,000 fps is mesmerizing
Next Story Content-Aware Crop: Photoshop CC 2016 aims to fill in blank areas after you straighten photos

Take to the skies for less: Become a 4K drone pilot for $460 with the Xiaomi Mi Drone 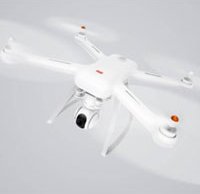 Chinese electronics company Xiaomi has revealed their 4K quadcopter drone that is capable of capturing RAW images -- and it's impressively affordable, at only US$460.

Some additional features include a claimed 27 minutes of non-stop flying, 720p live video from over a mile away (2 kilometers), a 3-axis gimbal, autopilot options, and much more. DIY Photography has put together an excellent article about the Mi Drone which I highly recommend checking out.

John Aldred at DIY notes that the Mi Drone appears to have impressive stabilization considering its price point. You can see the effect of the 3-axis gimbal in the sample video below. The 4K Mi Drone is entering public beta by the end of July. A crowdfunding campaign for the 1080p model will start up after the 4K beta test.

It'll be interesting to see just how much performance the Mi Drone offers for its price. The DJI Phantom 4 costs roughly three times as much but has been well received. Time will tell if the Mi Drone is a great value or if its pricing is too good to be true. Nonetheless, the more competition in the 4K quadcopter market, the better life will be for the consumer.

Does the Mi Drone's relatively low price point make any of you want to become a drone pilot yourself? Let us know in the comments below.