Previous Story Give your portraits a customized, colorful backdrop in Photoshop with these simple steps
Next Story Nikon D500 takes on martial artist and Chronos high-speed camera gains “bullet time” 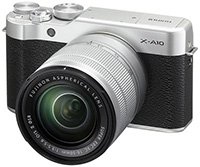 Fujifilm has announced the Fuji X-A10, a new entry-level mirrorless interchangeable lens camera which incorporates the selfie-friendly design of the recent X-A3 camera with a more wallet-friendly price. The $500 X-A10 uses a 16.3-megapixel APS-C CMOS sensor and pairs it with a compact, lightweight camera body.

The biggest features of the X-A10 are its 180-degree slide-and-tilt 3-inch LCD display and its self-portrait shooting modes. In addition to the selfie screen, which has approximately 100% coverage, the X-A10 includes special shooting modes such as "smile detection," "buddy timer" and "group timer" modes to make it easier for users to capture self-portraits alone or with friends. The X-A10 includes a vertical command dial on the rear of the camera to allow you to release the shutter when holding the camera for self-portraits. However, it isn't all about selfies as the X-A10 packs in a wide variety of shooting features and modes, including motion panorama and time lapse shooting modes. Like other Fuji cameras, the X-A10 includes an array of Film Simulation modes such as Velvia and Classic Chrome. The camera can shoot 1920 x 1080 resolution video at up to 30 frames per second and shoot JPEG images at up to 6fps (the camera can also record RAW images, but we don't have RAW shooting specs yet).

For much more information on the Fuji X-A10, head over to our overview of the camera. The X-A10 is available for preorder now and has a MSRP of just under US$500. The camera comes in black and is available exclusively in a kit with an XC 16-50mm f/3.5-5.6 OIS II lens.