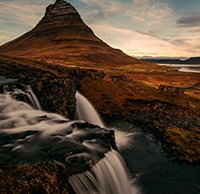 If you have spent any time looking at landscape images on the internet, you have almost certainly seen photos from Iceland. The small island nation in the North Atlantic is a treasure trove of amazing vistas that would make any photographer smile. A recent timelapse video from Nick Kontostavlakis called “Whispering Iceland” shows as well as any timelapse I’ve seen how visually distinct and stunning Iceland is.

The 4K video features a wide variety of popular locations in Iceland, including Vik, Reykjavik, Dyrholaey, a glacial lagoon and plenty of waterfalls! The Greek photographer utilized a variety of gear included Sony cameras and lenses and Zeiss lenses. The timelapse was processed and edited using Lightroom, Final Cut Pro X, After Effects and the LRTimelapse plug-in.

If possible, watch the video below in 4K resolution as the level of detail in Kontostavlakis’s work is staggering and best enjoyed full screen at the highest possible resolution.

Iceland is clearly a photographer’s paradise. To see more of Nick Kontostavlakis’s work, visit his website and follow him on Instagram. You can see more of his video work here.