Previous Story Frustrated with constant lens changes? Check out the TriLens triple lens holder you can wear on your belt
Next Story A bear-y scary portrait session: Photographer combines passions in surreal portraiture 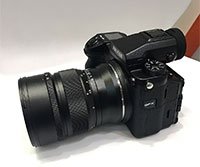 Mitakon has announced at the 2017 China P&E fair in Beijing a pair of lenses for the Fujifilm GFX. The Mitakon Speedmaster 65mm f/1.4 and Speedmaster 85mm f/1.2 lenses are scheduled to be released in 2017, but pricing information is not yet available.

The details are sparse on the pair of manual focus lenses, but both include a 77mm filter thread, to give some sense of their size. The 85mm f/1.2 lens is said to have a close focusing distance of around 3.2 feet (1 meter) and it has nine lenses in six groups with two of the optics being ED lenses, four being high refraction and low dispersion glass lenses. The lens has 11 diaphragm blades. Further, the 85mm lens will weigh somewhere around two pounds with a length nearing five inches.

There are images of prototype lenses and some sample shots available here and here. The Mitakon lenses are the first third-party lenses to be announced for the GFX, although there are many adapters already available for the camera to attach non-Fuji lenses to the mirrorless medium format camera.