Previous Story How to match total exposures of multiple images in Lightroom in only a few clicks
Next Story Thrifty Thursday: Save big bucks on cinema lenses, lighting and cameras from Canon, Nikon and Sony 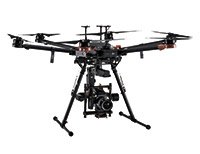 Back in 2015, Chinese drone-maker DJI purchased a minority stake in Hasselblad. That partnership led to a new bundle combining a Hasselblad A5D camera and DJI M600 drone in July of 2016. The Hasselblad A5D aerial camera was available in 50 and 80-megapixel versions.

That was a very serious bundle, but DJI and Hasselblad have topped it with a new integrated drone platform which combines the M600 Pro drone, a Ronin MX gimbal and Hasselblad's 100-megapixel H6D-100c camera.

This bundle is clearly aimed at high-end fine art landscape work in addition to professional surveying work, so what's it going to cost? No pricing for the bundle was announced, but if you break down the individual components, they cost: $5,000 for the DJI M600 Pro drone, $1,600 for the Ronin MX gimbal and around $33,000 for the Hasselblad H6D-100c. In other drone news, if you do manage to get your hands on an M600 Pro and 100-megapixel Hasselblad medium format camera, maybe keep it far away from any crazy neighbors. Fstoppers is reporting that Brad Jones was flying his DJI Inspire 2 drone (a premium $3,000 drone) in front of his home when he heard gunshots from over his neighbor's way. Next thing you know, his drone is falling toward the ground with a bullet hole in the left rear motor and some impact damage.

I'd feel a bit nervous about flying a $3,000 drone, let alone one carrying a $30,000 payload. With that said, I cannot wait to see what the H6D-100c can do up in the sky. Drones offer an amazingly cool view of our world and one with a medium format camera strapped to it should deliver phenomenal results.

Tweet
Comment
Previous Story How to match total exposures of multiple images in Lightroom in only a few clicks
Next Story Thrifty Thursday: Save big bucks on cinema lenses, lighting and cameras from Canon, Nikon and Sony