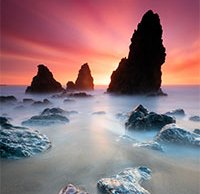 Breakthrough Photography already offers what they call the “world’s sharpest and most color neutral CPL filter,” but they are adding to their filter lineup with new Dark CPL and new tempered glass – a world’s first, per the company – graduated and solid neutral density filters. At the time of writing, the Kickstarter project has been funded, raising nearly $250,000 (the goal is $50,000) with over 800 backers.

Looking at the upcoming new filters, what is a dark CPL? If you’ve shot with a polarizer and separate ND filter on a wide-angle lens before, you’ll likely have experienced vignetting, especially when shooting wider than 20mm. The new Dark CPL is designed to combine polarization and neutral density in one individual filter and allow you to capture images without vignetting at focal lengths as wide as 16mm. More specifically, the Dark CPL is a combination of Breakthrough’s X4 CPL and X4 Neutral Density filters in one piece. Breakthrough is saying that their new X4 GND filters are the world’s first tempered glass GND filters. They don’t stop there, though, as they also claim that they are the world’s sharpest and the most color neutral graduated neutral density filters as well. We certainly aren’t in a position to comment on those claims, but the filters do look promising and offer a variety of nice features.

The filters are constructed using German-made SCHOTT B270 optical glass and offer 99.6 percent transmission through the clear portion of the glass. The rectangular filters have a transitional area in the middle to softly go from the dark to clear portions of the filter. X4 GND filters have MRC16 and nanotec coatings to reduce surface reflection and make it easier to clean the glass. Given their tempered glass construction, the filters are designed to withstand harsh conditions, including salt water and even sand, which are familiar elements to many landscape photographers. Unlike a resin filter, there is no concern of warping with a tempered glass filter. What about drops? After all, glass is breakable. Breakthrough claims that their new filters won’t break, even when dropped on hard surfaces. It’s not a claim you should want to test nonetheless.

Alongside the X4 GND, Breakthrough is also releasing a square version (100mm and 150mm) of the X4 ND filter. Both the X4 GND and X4 ND Square filters come with protective cases which have their own unique colors to help you identify the filters.

X100 Holder: Snap-lock mechanism and no vignetting down to 16mm on full-frame cameras Pricing and availability: What do these new products cost and when are they coming out?

During Kickstarter, you can get a Dark CPL, X4 GND or 100mm X4 ND Square filter for $149 with deliveries beginning in August. The filter comes with its accompanying protective carrying case. This represents a savings of $10 to $50 off the eventual retail prices. The new X100 Holder is available for $39 during the Kickstarter campaign (it’ll cost $49 at retail) and the aluminum adapter ring is $5 with the brass version costing $15 ($7 and $17 respectively at retail). These are notably lower prices than you’ll pay for many filter holder and adapter ring systems.