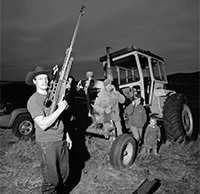 Photographer Danny Wilcox Frazier had made his career shedding a light on the often untold stories of people in small communities across middle America. While finishing the work for his newest book, "Lost Nation," Adobe followed him for four days in South Dakota to take a closer look at his process and his subjects.

Armed with his Leica rangefinder camera, Frazier focuses on capturing people as they truly are and letting his viewer make their own conclusions. His images may be political by virtue of their subject matter, including a particular standout in which a young man is armed with a large-caliber rifle, but ultimately his imagery is without judgement. After all, the "fly-over" states are his home and issues are rarely black and white.

Given the current political climate in the United States, his images have taken on additional meaning for some viewers. For many folks in rural communities, issues of gun control, a stagnant and more globalized economy and immigration have hit them particularly hard and it's impossible to take a look at their lives without hitting on politics.

Ultimately, Frazier's goal is to share the lives of his subjects with his viewer through honest, raw imagery. He knows these people, either directly through long-term friendships or more indirectly through a shared upbringing and culture, and his knowledge shows through in his work and how he represents rural middle America.

In the video below, we follow Danny Wilcox Frazier in South Dakota as he works. The video may not be suitable for all viewers, so proceed with caution.

To see more work from Danny Wilcox Frazier, follow him on Instagram. For additional information on Adobe's project as part of their Adobe Create Magazine, click here.