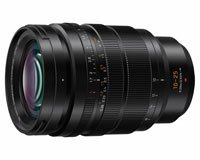 While a lot of the talk recently has been about Panasonic's new full-frame S system – and the latter portion of this news will be about that system too – they have a fervent fanbase of Micro Four Thirds owners, clamoring for new gear. Panasonic's MFT news today is surely going to whet the appetite: a new Leica DG Vario-Summilux 10-25mm f/1.7 ASPH standard zoom lens. This fast lens is the world's first standard zoom lens with a constant f/1.7 maximum aperture.

The new lens, which delivers a 35mm-equivalent focal length range of 20-50mm, has been designed to not only deliver exceptional still image quality but also be ideal for video recording. To make it a strong option for photographers and videographers alike, the zoom lens is compatible with 240-fps high-speed sensor drives for autofocus, has a silent inner focus drive system, and has a stepless aperture ring with a micro-step drive system, ensuring smooth brightness changes when zooming or panning. Further, the optics have been designed to minimize image shifts during zooming and includes a mechanism to suppress focus breathing.

Looking closer at the optical design of the Panasonic 10-25mm f/1.7 lens, it's comprised of 17 elements in a dozen groups, including a trio of aspherical lenses and four Extra-low Dispersion (ED) elements, which are designed to suppress chromatic aberration. The aspherical elements in particular act to correct spherical aberration and distortion. Despite the complex optical structure, Panasonic and Leica have worked to ensure that the fast lens remains compact and lightweight. Specifically, the dust/splash-resistant lens is about 5 inches (128 millimeters) long and weighs approximately 24.3 ounces (680 grams). Included in its physical design is a focus clutch mechanism to quickly switch between auto and manual focus and a 77mm filter thread. With this new lens, Panasonic is showing continued commitment to their Micro Four Thirds Lumix lineup.

Designed to be compatible with the existing Lumix S Pro 70-200mm f/4 O.I.S. lens and an upcoming 70-200mm f/2.8 telephoto zoom lens (to be introduced later in 2019), the newly-announced Lumix S 1.4x (DMW-STC14) and Lumix S 2x (DMW-STC20) teleconverters will arrive at retailers this July, priced at about $500 and $600 USD respectively. The latter teleconverter will turn 70-200mm lenses into 140-400mm lenses, delivering the most reach yet available in Panasonic's new Lumix S full-frame mirrorless system. This July, Panasonic S1 owners will be able to upgrade their cameras with paid Upgrade Software Key DMW-SFU2. This software upgrade will allow the camera to record V-Log video with 14+ stops of dynamic range, which is the equivalent of the newly-announced S1H camera and existing high-end Panasonic cinema cameras. Additionally, with the upgrade, the S1 will be able to record 4:2:2 10-bit 4K 30p/25p video internally, which is a world's first for a full-frame digital stills camera. Further, using the camera's full-size HDMI output, the camera will be able to output 4:2:2 10-bit 4K 60p/50p video.

The upgrade is priced at about $200 USD.