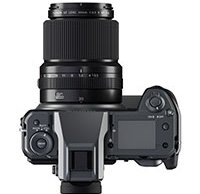 The GF 30mm f/3.5 lens offers a 35mm equivalent focal length of 24mm, which results in a field of view of 84.7 degrees. The lens includes 13 elements across 10 groups, including a pair of aspherical lens elements and two ED elements. The aperture ranges from f/3.5 at the widest open to f/32 at its minimum, and the diaphragm includes nine rounded blades. Capable of focusing as closely as about a foot (0.32 meters), the GF 30mm delivers a maximum magnification of 0.15x. Further, for video users, the lens has focus breathing of just 0.05%, meaning the image should be very stable when focusing at different distances. Despite being a medium format lens, the GF 30mm f/3.5 weighs in at just 1.2 pounds (510g), making it one of the lightest and most portable lenses in the GF lens lineup. The lens is 3.9 inches (99.4mm) long and has a maximum diameter of 3.3 in. (84mm). The lens does have a slightly tapered design, meaning that its maximum diameter is at the lens mount. Like other GF lenses, it includes an aperture ring and a wide, grooved focus ring. The lens has a 58mm filter ring. In addition to its compact design, the new lens also includes dust and weather resistance. Specifically, the lens includes sealing at nine locations, including at the lens mount itself. Shown here on the Fujifilm GFX 50R camera, the GF 30mm lens features a tapered design with a maximum diameter of 3.3 in. (84mm). The lens also comes standard with a removable petal-shaped lens hood.

"This lens is a great complement to our existing series of GF lenses and gives image-makers a great wide-angle option for landscapes, architecture, or wide environmental portraits," says Victor Ha, senior director of marketing and product management with the Electronic Imaging Division of Fujifilm North America.

First impressions: A nice addition to the GF lens lineup

I have been shooting with the new GF 30mm f/3.5 lens for about a week on a Fujifilm GFX 50S camera, and the lens has made a positive first impression. It is a lightweight, well-designed lens, and its field of view works well for many landscape situations. It fills a nice void between the very wide GF 23mm f/4 lens and the versatile GF 32-64mm f/4 zoom lens. Autofocus performance has proven to be good on the GFX 50S, although I suspect it'd be even more impressive on the GFX 100 with its improved autofocus system. While far from a macro lens, the GF 30mm f/3.5 lens' good close-focusing distance allows you to get quite close to a subject. This works well when photographing larger subjects or when focusing on the foreground in a landscape scene. I am technically using a pre-production sample, so I cannot fully evaluate the GF 30mm's image quality, but it has impressed me so far. Even when shooting wide open at f/3.5, the lens is very sharp. As you stop down, it unsurprisingly becomes even sharper, especially as you move toward the extreme edges of the frame. 100 percent crop of the above image.