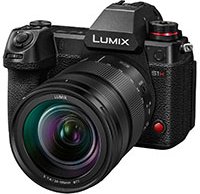 Last August we wrote that the Panasonic S1H 'represents the new state-of-the-art for ILC video capabilities.' At its launch, the S1H was already capable of recording 6K/24p video and 10-bit 4K footage at 60 frames per second. With new firmware version 2.1, Panasonic has now added RAW video output to the S1H's already impressive list of video features.

In creating the new firmware, Panasonic worked alongside Atomos, a company well-known for creating professional video equipment. After upgrading your S1H to firmware 2.1, which you can do for free right now by visiting Lumix customer support, the S1H will be able to record a maximum of 5.9K/29.97p and 59.94p 4K RAW video data over HDMI output and save the file(s) as Apple ProRes RAW on the Atomos Ninja V 4K HDR monitor-recorder. Further, the S1H complies with 3.5K Anamorphic 4:3. The Panasonic S1H was already an incredibly capable mirrorless ILC for recording professional-quality video. With firmware version 2.1, the S1H is even more impressive.

As mentioned earlier, Panasonic S1H firmware version 2.1 is available for download now. If you aren't already an S1H owner but would like to learn more, you can visit our Panasonic S1H Overview, including a hands-on tour of the camera (seen above). We've also published an interview with Panasonic's Yosuke Yamane, in which the Director of Panasonic Corp.'s Imaging Business Unit, Smart Life Network Business Division, Appliance company discusses the company's strategy with respect to the S1H, the Lumix S Series in general and the incredible technology the company has included in the S1H.