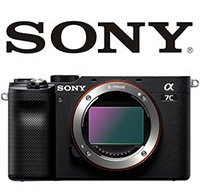 Sony has announced a new model line in its full-frame mirrorless camera lineup, the Sony Alpha 7C. The A7C is Sony's smallest and lightest full-frame interchangeable lens camera to date*. The A7C is about 20% smaller and lighter than the Sony A7 III and is approximately the same size as Sony's APS-C A6600.

Aesthetically, the A7C looks like the A6600, thanks in large part to the OLED electronic viewfinder being moved from the top to the left corner of the camera's rear. To reduce the size of the A7C, Sony made a new 5-axis in-body image stabilization system smaller and revised the design of the shutter unit. Further, Sony opted for a monocoque body construction. The A7C, comprised of magnesium alloy, still includes dust and moisture resistance, however.

Inside the A7C is the same 24.2-megapixel backside-illuminated CMOS image sensor as is found in the A7 III. The sensor is paired with Sony's BIONZ X image processor, resulting in a high ISO of 204,800. The A7C can capture full-resolution images at up to 10 frames per second with full AF/AE tracking. Like the A7 III, the new Alpha 7C includes a Hybrid AF system that relies upon 693 phase-detect and 425 contrast-detect autofocus points. The A7C includes Real-time Eye AF for both human and non-human animal subjects. Real-time Tracking AF is also available and can be initiated via the AF On button on the back of the A7C.

In terms of video features, the A7C can record 4K/30p video, with Real-time Eye AF (human only) and customizable autofocus settings. The camera offers up to 14 stops of dynamic range with the camera's S-Log 3/2 and HLG/HDR support. Sony has designed the A7C to work well for vloggers, and part of appealing to this target audience is the side-opening vari-angle LCD. The A7C is also compatible with Sony's Digital Audio Interface thanks to its included Multi Interface Shoe.

Alongside the A7C, Sony has introduced a new retractable FE 28-60mm f/4-5.6 kit lens. Sony states that the new lens is the world's smallest and lightest full-frame standard zoom lens. When paired with the A7C, the camera and new lens weigh only 23.8 oz. (675g). This combo is 29% lighter and 33% smaller than the Sony A7 III with its FE 28-70mm kit lens. Sony has also announced a new compact external flash unit, which is compatible with not only the new A7C but other Alpha 7 models. The new HVL flash unit is about 12% smaller and sits 30% lower than previous Sony HVL external flashes. The flash can work wirelessly as part of a radio wireless system, both as a controller and a remote flash. It is compatible with the Sony A7R III and IV, A7 III, A7S III and new A7C. In order to reduce the size of the flash, it doesn't have a display and doesn't offer swivel adjustment, although it can tilt. The flash will retail for $250 when it launches this fall.

The Sony A7C will be available as a body only and as a kit with the new FE 28-60mm f/4-5.6. The A7C will be sold in both black and black/silver colorways. The body-only option will launch with a retail suggested price of $1,800 and the kit will cost $2,100. Sony expects the A7C and A7C kit to be available starting in November. For more information on the Sony A7C, read our Sony A7C Preview.