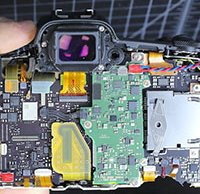 Late last month, Lensrentals dismantled a Fujifilm GFX 100 after it had an ill-fated encounter with saltwater. Lensrentals is back with another camera teardown, this time it's the Canon EOS R5 on the operating table. Better still, unlike the GFX 100, the EOS R5 is in fine working order.

The first step is removing the battery door and getting into the bottom of the camera. The battery door is typically an area where water can work its way into the camera, which as we saw with the GFX 100 teardown can very quickly have devastating effects. Fortunately, the R5 has weather resistant gaskets around the edge and the flat surface on the inside of the battery door is itself a soft gasket material.

Next, Roger Cicala and Aaron Closz removed the viewfinder, which is attached with a pair of screws, and the grips covering the camera. These are attached using double-sided tape and despite the surface being slightly different than earlier Canon models, it is about the same thickness and flexibility. The R5 includes improved weather sealing along the bottom plate and where the main camera plate and side plates connect. Image credit: Lensrentals, 2020

With the battery door, viewfinder and grips removed, it's time to start disassembling the camera body. Starting with the bottom plate, the Lensrentals team made a neat discovery, improved weather sealing around the bottom plate. Lensrentals says, 'We're used to seeing a bead of rubber felt between the plastic pieces of the body to seal for weather. Canon now has a soft rubber gasket along the mating edge of the pieces. This is much larger and provides a greater seal area than what we usually see.'

For Lensrentals, as they need to repair cameras regularly, there are certain design elements they hope to find when they teardown a new camera. One of these is a sturdy and replaceable tripod plate and mount. Fortunately, the R5 ticks both these boxes. On the other hand, the HDMI and digital out ports are both part of the main printed circuit board (PCB), meaning that damaging either of these ports, perhaps by yanking a cable loose, will result in an expensive full PCB replacement. The sealing gaskets found around the bottom plate were also found where other parts of the body were sealed together. The team could even feel the suction when taking apart the pieces, which is unusual. Lensrentals states that 'this sealing seems to be a step up from anything we've seen before.' Of course, they also state that it only takes one weak area to cause problems, but it's still excellent to see that the R5 appears to be well-sealed against water ingress.

The next piece to remove is the back plate. Here the camera and its wiring look familiar to the EOS R. When removing the top plate, they didn't find quite the same level of weather sealing as located in the bottom and side plates. However, with the top plate, typically you're most concerned about rainfall, which shouldn't violate the standard sealing design found in the R5. Here is where Cicala engages in a bit of speculation. As regular readers of online camera discussions will know, there has been a lot of heat thrown Canon's way with respect to the thermal design of the R5. Shortly after the announcement of the R5 and R6, Canon responded to overheating concerns. The R5 is thermally-limited in some video recording modes. Cicala speculates, with ample caveats, that perhaps a looser sealing at the top of the camera allows heat a better chance to escape the camera body. However, Lensrentals is not tearing down the R5 to figure out the thermal flow of the camera, but it is something interesting to consider. Beyond this design decision which may or may not have anything to do with thermal flow, the R5 includes numerous heat sinks and thermal pads, as one would expect for a camera with the R5's video features. Lensrentals states that there 'is a lot of heat sink compared to most photo cameras, but not even a fraction of what we see in a video camera.'

When viewing the image stabilizer and sensor arrangement, there is much less air and empty space. This is a pretty big change compared to the original EOS R, which did not include in-body image stabilization. Another change in design between the EOS R and the R5 is with respect to how Canon flattens the image sensor to ensure that it's parallel to the lens mount. In the EOS R, Canon used tension screws. They've since switched to using shims. In fact, every camera with IBIS that Lensrentals has dismantled has used shims to adjust the image sensor. Ultimately, while there are some interesting elements of the EOS R5's design and construction, Lensrentals didn't find 'much that was surprising.' The camera includes a lot of components and not much air. The bottom and sides of the camera feature an aggressive new sealing design. With this sealing in mind, and how tightly-held together the body is, Cicala and Closz wonder where the heat goes to escape the inside of the body.

To view many additional pictures of the inside of the Canon R5 and to learn much more about what Cicala and Closz thought of the R5's design as they dismantled the camera, head on over to Lensrentals. For more on the Canon R5, you can read our existing coverage and download sample images by clicking here.