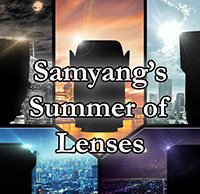 Samyang isn't pulling any punches this summer. They've just announced on their Facebook page that they are going to reveal five news lenses over the next five weeks, unveiling a new one each Monday starting July 18.

However, that's not all! If you publicly share the Facebook post and leave a comment that states the lenses you expect to be released, you can be one of ten individuals to win a $20 Amazon coupon. You have until Friday to enter the contest, which is one of the easiest contests you'll find.

It'll be interesting to see what lenses Samyang announces over the next five weeks. Will they be autofocus? Any mirrorless lenses? They released a teaser image -- seen below -- but it is hard to glean any concrete details from it. Readers, what do you think Samyang has up their sleeve? Sound off in the comments section down below (family-friendly, please!). Stay tuned to Imaging Resource to get the details on the new lenses as they become available.