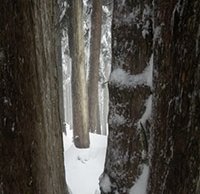 Contrast serves many useful purposes in a photograph. Not only can it create visible sharpness by accentuating the dark areas of edges, but it can also be used to create depth in your photographs. You can of course increase the overall contrast in an image in every photo editor out there, but you can also utilize software such as Photoshop to create highly precise, selective contrast. One way to do this is by dodging and burning. If you're unfamiliar with the terms, dodging is selective lightening over a chosen area in an image and burning is selective darkening.

Photographer Adam Gibbs uses dodging and burning particularly to create depth in his landscape and nature images. In the video below, Gibbs offers just over 40 minutes of a walkthrough of a single image. The image was captured with his Nikon D850 camera and Nikon 16-35mm f/4 lens at 28mm with an aperture of f/16. When he shot the image, the light was a bit flat, but he knew he could utilize software to help him bring out more detail and depth in the shot. This is an important aspect of post-processing that is often left undiscussed but improving your skills on the computer will allow you to visualize scenes in the field much better. It's very useful to know what you will be able to do to your image at the time of capture.

Ideally, the natural light in a scene would work with your composition to lead your viewer's eye through the scene. However, rarely does nature cooperate in such a way. In addition to creating depth through selective lightening and darkening, you can also use dodging and burning techniques to subtly create paths through your image for the viewer to follow.

To see the different ways that Adam Gibbs uses dodging and burning to create depth and visual interest in his photography, watch the excellent tutorial below.