Previous Story Nikon Z 14-24mm f/2.8 S is a great take on Nikon’s classic wide-angle zoom: See our in-depth Field Test
Next Story Lensrentals partners with Ballet Memphis to produce The Nutcracker for everyone to enjoy 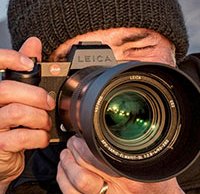 Leica has announced the SL2-S, its third full-frame L-mount camera. Leica is billing the SL2-S as its most versatile camera for still photography and video.

The SL2-S is Leica's follow-up to the Leica SL2 and incorporates the same 'Made in Germany' robust construction, IP54 water resistance, LCD touchscreen, viewfinder, in-body image stabilization and autofocus system.

The magnesium alloy body weighs 2.05 pounds (905 grams) including its BP-SCL4 battery. Battery life is rated at 510 shots, which is 140 more shots than the SL2's rating. The camera includes dual UHS-II SD card slots. Like the SL2, the camera does not include a wealth of physical controls, although the camera's buttons can be extensively customized. The rear of the camera includes a 3.2-inch fixed LCD with 2.1M dots. The OLED electronic viewfinder, which has 5.76M dots, delivers 100% image area coverage and has 0.78x magnification.

While the exterior of the Leica SL2-S looks like its sibling, the inside of the cameras differ considerably. The SL2-S has a brand-new (to Leica cameras) 24-megapixel full-frame backside-illuminated CMOS image sensor, rather than the 47-megapixel sensor found in the SL2. With its lower resolution, the Maestro III-powered SL2-S can capture DNG or JPEG images at up to 25 frames per second. The camera can shoot JPEG images at up to 9 fps indefinitely, stopping only when the pair of SD cards are full. Per Leica, the SL2-S has a 4GB buffer contributing to its impressive performance. The 24-megapixel sensor has a native ISO range of 100-50,000, which can be expanded up to ISO 100,000. Leica says, 'The high sensitivity of up to ISO 100,000 – combined with the fast autofocus and in-body image stabilization – enables photographers to capture excellent images in all kinds of environments and even the dimmest of light.' You can record up to 14-bit RAW files with the SL2-S. The Leica SL2-S can capture DNG or JPEG images at up to 25 frames per second.

In terms of autofocus performance, the SL2-S uses a contrast-detect autofocus system with 225 points. Leica dubs the system 'Leica Object Detection AF'. The system automatically detects whether a subject is stationary or moving and switches between motion and focus priority accordingly.

Although the camera can shoot at up to 25 fps, with continuous autofocus, speeds are capped at 5 fps. Similarly, the 25 fps burst speeds rely on the electronic shutter, which has a maximum shutter speed of 1/16,000s. With respect to the mechanical shutter, its minimum shutter speed is 30 minutes (1,800 seconds) and the max speed is 1/8,000s.

In addition to the different image sensor, the SL2-S separates itself from the SL2 through its video features. The SL2-S can record 4K 10-bit 4:2:2 and Cinema 4K ProRES footage at up to 30p to an SD card and up to 60p to an external recorder via its full-size HDMI port. The camera can also do L-log recording with a pair of built-in lookup tables (LUTs). Leica says more LUT's will be available in the future. The camera can record 1080/180p video as well and doesn't include a recording limit. Like the SL2, the SL2-S has separate photo and video shooting modes, as seen here on the camera's rear 3.2" fixed display.

The Leica SL2-S's L-Mount is fully compatible with Leica SL system lenses, adapted APS-C TL lenses and lenses from Leica's M, R and S systems. Further, as part of the L-Mount Alliance, SL2-S owners can use the more than 40 autofocus lenses available from alliance partners, including Panasonic and Sigma. Further, for video-heavy applications, Leitz Cine lenses can be adapted to the SL2-S. The SL2-S uses the Leica L-Mount. As part of the L-Mount Alliance, the SL2-S is compatible with L-Mount lenses from other alliance members, including Panasonic and Sigma.

Leica bills the SL2-S as 'the perfect all-rounder for still photography and cinematic videography.' The Leica SL2-S is available starting today from authorized Leica dealers for $4,895 USD. Further, as announced by Capture One on Tuesday, Leica cameras, including the SL2-S, are fully supported in Capture One 21, including tethered shooting functionality.

If you'd like to hear about the SL2-S's new features and its performance from Leica photographers Marc Stickler, Dominic Nahr and Bernhard Spöttel, you can check out the three videos below.